On September 21st, 2019, the joint pitch event ‘Pitch to Link China (Berlin-Lishui)’, organized by the Berlin Technology Center, in Berlin, Germany, finished in waves of warm and spontaneous applause by an excited and cheerful crowd. The competition was joined by international personages including Peishu Zou (Vice Chairperson of Representative of Lishui in the National People’s Congress), Haiming Liu (Vice Secretary of Lishui government), Yongjun Xiong (Vice Mayor of Longquan County), Zhenping Xiang (Head of the Bureau of Science and Technology in Jinyun), Michael Bose (Chairperson of the Association of Berlin, Central and Eastern Europe, and Asia), and Jiayu Hua (Representative of Berlin Technology Center).

Peishu Zou, during the competition, stated that Lishui City’s increasingly perfected transportation network, fast-growing ecological industries, and rich entrepreneurships, all of which benefited from the city’s strategic planning, welcome all entrepreneurs and companies. Today, the emerging industries that reside in Lishui City are mostly high-end equipment manufacturing, new materials, energy conservation, biology, new energy, new energy vehicles, and a new generation of information technology, concerning over 118 companies and producing approximate 3.5-billion GDP annually. In recent years, industry-leading manufacture of glass and glass-ceramics, Schott AG, built its branches in Lishui City, a representation of local high-tech industries. A prototype of Central Europe technology production park took its shape. The purpose to participate in this competition, Peishu Zou stated, was to introduce Lishui City to overseas companies and teams, inviting them to join Lishui community rich of resources and technological innovations. 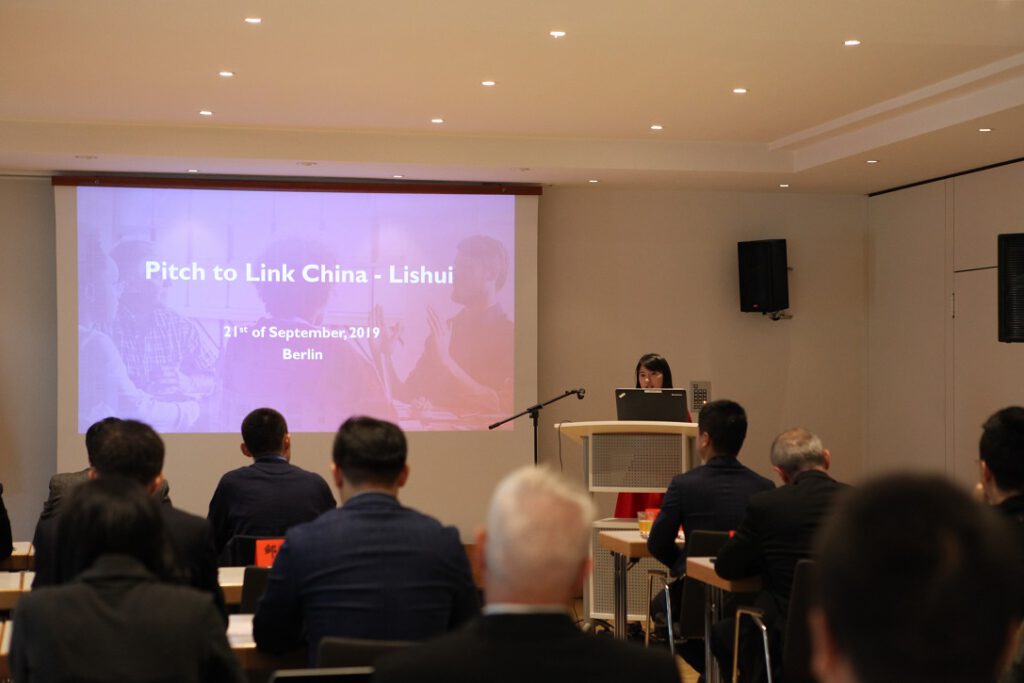 Strategic Consultant of Berlin Technology Center, Michael Bose, maintained that China holds a special position in Berlin’s strategical development in technological innovation, and the strong partnership forged between China and Germany influenced not only themselves, but the entire Eurasia region. He was surprised by the competition held in Adlershof technology and science park where he had worker for years, knowing the park’s strategical significance as the leading science park in Germany and most successful science park in Europe. He was pleased to welcome the establishment of Berlin Technology Center in this park and wished Lishui City’s a prominent future when bold and innovative ideas shall be realized and implemented.

This competition encompassed 11 programs including AI, robotics, 3D-printing, industrial coating, RTLS (real-time location system), electric technology development, and other programs. Representing the latest achievement in their fields, these projects—some had already developed prototypes, while others had begun experiments with Chinese partners—seek to join the prosperous and promising Silk Road by entering Lishui. Intelligent wearable adult-incontinence sensor and its data system won the first prize. The second prize was taken by a technology based on mobile crowdsourcing and RTLS’s edge computing. The project that won the third prize was 3D metal printing at the micro level.

Good wish to the distinguished projects which, in no time, will surely bring keen minds to and inject inexhaustible vigor into the thriving high-tech industries in Lishui and the world.

Close Menu
We use cookies on our website to give you the most relevant experience by remembering your preferences and repeat visits. By clicking “Accept”, you consent to the use of ALL the cookies.
Cookie settingsACCEPT
Manage consent

This website uses cookies to improve your experience while you navigate through the website. Out of these, the cookies that are categorized as necessary are stored on your browser as they are essential for the working of basic functionalities of the website. We also use third-party cookies that help us analyze and understand how you use this website. These cookies will be stored in your browser only with your consent. You also have the option to opt-out of these cookies. But opting out of some of these cookies may affect your browsing experience.
Necessary Always Enabled

Any cookies that may not be particularly necessary for the website to function and is used specifically to collect user personal data via analytics, ads, other embedded contents are termed as non-necessary cookies. It is mandatory to procure user consent prior to running these cookies on your website.